Zhang Peili: From Painting to Video, From Beijing to Canberra
Water: Standard Version from the Cihai Dictionary (1991) presents national TV newsreader Xing Zhibin—famous for her broadcasts during the 1989 Tiananmen “incident,” as it is described in China—reading aloud every word and phrase that contains the character shuǐ (water) from a dictionary. Tedious, absurd, yet also poetic, this flood of meaningless words, freed of any context, parodies official news broadcasts and suggests the mutability of language in the hands of the state propaganda apparatus. Read more HERE

Ten Contemporary Chinese Women Artists You Should Know
Chinese contemporary art is ‘the flavour of the month’ in the West, but there are fascinating stories as yet insufficiently told: the stories of contemporary women artists. The ten artists introduced here are members of a generation who grew to adulthood in the 1980s and 1990s. Born into a post-Mao China that was entirely and disconcertingly different from the world of their parents, they have been forced to adjust to a tsunami of change. Click HERE to read a brief account of conversations with these ten artists. My book 'Half the Sky: Conversations with Women Artists in China'  contains their stories and many more.

Between Heaven and Earth: Bingyi's Meditative Ink Paintings
The extraordinary and multi-talented Bingyi Huang works in a converted Yuan Dynasty Temple close to the Forbidden City on Beijing's central axis. In October 2013 Luise Guest went to meet her to find out why she spent months in the mountains producing absolutely enormous ink paintings, somewhere between earth art, performance art, action painting and the traditional methods of the 'Shan Shui' painter.
Read the article, published in November 2013 on www.theculturetrip.com:
http://theculturetrip.com/asia/china/articles/between-heaven-and-earth-bingyi-s-meditative-ink-paintings/

Material Practices: Stitching, Fabric, and Textiles in the work of Contemporary Chinese Artists
Mao Zedong once said that revolution is not a dinner party. Less famously, he said it is not embroidery, either. Interestingly, however, some female contemporary Chinese artists have chosen to work with thread and textiles—and embroidery—in experimental, maybe even revolutionary ways. From Lin Tianmiao’s overt exploration of sexuality, fecundity, and the aging and decay of the body, to Yin Xiuzhen’s use of the embodied memories in old clothing; from Lin Jingjing’s stitched paintings of the recorded details of many lives, to Gao Rong’s embroidered, padded simulacra of quotidian elements of daily life in Beijing, they variously apply stitching, embroidery, felting, padding, binding, and fabric.
Read the article published January 2014 in www.dailyserving.com 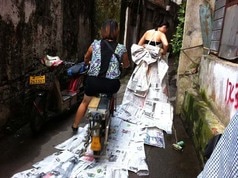 The Song of the Shirt: Feminist Performance Artist Wu Meng
In her 2013 performance work And They Chat (also called Chat with Women), Wu Meng walked the streets of the old city of Haikou in a wedding dress made of newspaper, tying discarded domestic objects such as pots and pans, a broom, and a large mosquito net onto her body as she went. Her load became heavier and heavier as she dragged herself down the road, followed by small children and curious onlookers. The performance concluded with a reading from Engels on marriage and monogamy. How should women view themselves and respond to this complex and lonely world?” In asking this question, Wu Meng creates a body of work that explores the contested territory of gender in today’s China.
Read the article published February 21 2014 in www.dailyserving.com